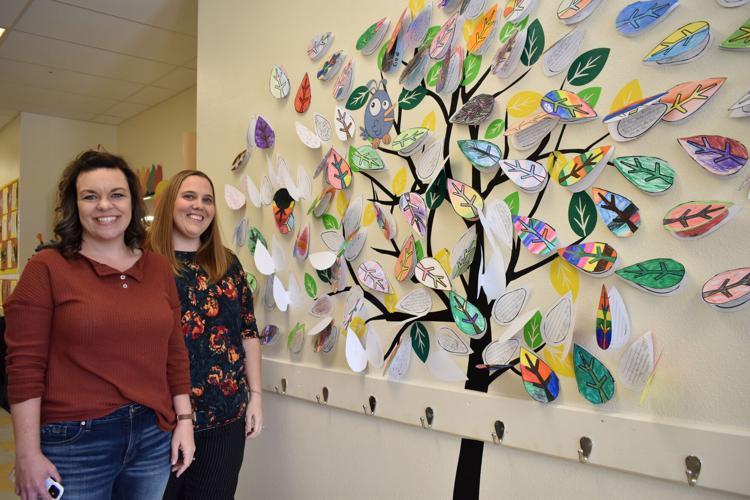 The students in Pima are not only taking their core classes and career and technical education classes, they’re also learning about social and emotional well-being.

Since August, elementary and junior high students have been getting a monthly or twice-monthly break from their normal classes to sit for an “advisory hour” just like their high school counterparts.

Pima Unified School District Counselors Katie Williams and Ashley Scorse pick one or two topics per month and develop age-appropriate lesson plans based on those topics. The lesson plans are then shared with K-12 teachers who guide their students through the activities. Typically at the grade school level, there’s a book to read; at the upper levels there are often videos to watch.

This month the topic at all levels will be Gratitude and next month it’ll be Kindness. At the high school, they’ve talked about depression, anxiety, suicide awareness and brain development. At the lower levels, the kids have learned Humpty Dumpty didn’t grow fearful after his great fall, but saw it as an opportunity to grow and learn.

During the advisory hour, the teachers carefully observe their students to check for any red flags so they can alert Scorse and Williams to any students who might need individual sessions. The counselors also pop into the classes.

“We’re just checking to make sure the lesson is going OK and the kids are OK because some of the topics could have triggers in them,” Scorse said.

At the upper levels, the hour about depression and suicide awareness seems to have had the biggest impact on the kids, the counselors agreed.

“I think some of the teachers struggled with how personal it was, but I had more students come to me (than usual) because the teachers were honest and said ‘If you’re dealing with these feelings please go see Mrs. Williams.’ So students who wouldn’t normally come into my office came in to talk to me about things they were struggling with,” Williams said.

The four or five students each had different things going on in their lives, but Williams said she made sure they came to realize their feelings were not unusual and they were not alone and had a safe place to go to for help.

At the junior high level, students can sometimes be somewhat silly and some questioned why they were discussing such a topic, Scorse said. That is, until one teacher bravely came forward.

“She shared a personal story about one of her family members who had committed suicide,” Scorse said. “She said that completely reset the tone and they realized that even if they’re not struggling with those feelings it could be a family member or it could an older sibling.”

The advisory hour started out in the high school two years ago and Pima Unified School District Superintendent Sean Rickert liked it so well, he suggested it for the junior high. Scorse then chose to implement it at the elementary level, too.

“I liked that it’s a dedicated time where they’re all getting a lesson in social and emotional wellness,” Scorse said. “I also like that they’re getting that lesson from other people besides just the counselors because I think it gives them a chance to see the teachers as another safe space. If their teachers are willing to talk about some hard topics, I think it opens up their ability to want to communicate with their teachers when they have concerns.”

The teenagers also seemed to enjoy learning about brain development and specifically about teenage brains. They learned the part of the brain that controls impulses is the last part to develop and that doesn’t usually happen until around 25.

“I think for a lot of them it will stop them, ‘Oh maybe I shouldn’t do that even though my brain is telling me to,” Williams said. “That’s the hope at least.”

Next month, the kids will discuss kindness and the importance of walking in someone else’s shoes. The high school kids will watch videos and be asked to write 10 unique things about themselves, Scorse said.

“I think it will increase awareness of other people and how somebody else might be feeling, which at this age that teenage brain isn’t very good at. They’re very self-centered,” Scorse said.

The counselors hope to eventually have four years’ worth of topics and they’ll continually seek input from the teachers as to how they can add and adapt their lesson plans.

“Next year even if we use the same topics, we will have different lessons,” Scorse said.

The teachers like the program because it breaks up their routine and because they see the benefits, the counselors said.

“Pima teachers are always good about whatever the kids need,” Scorse said. “They care, they for sure care about their kids and they know that if their social and emotional well-being isn’t good then their learning potential isn’t good.”